Author Julia Meloni tells us that Martini’s own confessor claimed that Benedict’s resignation had been “scripted since his pontificate’s beginning – because Martini had shifted his votes to Ratzinger at the 2005 Conclave. » 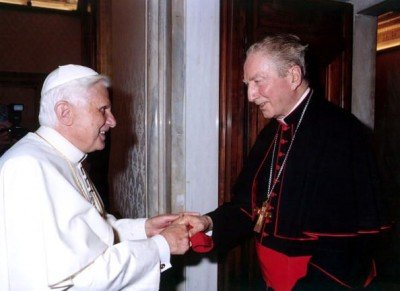 Pope Benedict and Cardinal Carlo Maria Martini prior to the former’s resignation.

(LifeSiteNews) — The American scholar and columnist Julia Meloni has just published her long-awaited, excellent, and deeply researched history of the Sankt Gallen Mafia, a group of progressive bishops regularly meeting in Switzerland and plotting to further revolutionize the Catholic Church. The Sankt Gallen Mafia: Exposing the Secret Reformist Group Within the Church tells us much about the machinations of these leftist bishops and cardinals, their agenda, and even their idea that the Church needed a new “Francis” long before Pope Francis was elected. But the captivating book tells us also more about Pope Benedict XVI’s own possible entanglement with this group.

Meloni is able to retrace, with the help of different sources, the events at the 2005 Conclave that led to Pope Benedict’s election and possibly to his later resignation. We shall highlight this aspect of this new book, since many aspects of Pope Francis’ election are already better known, and also since the parallels between the intentions of the Sankt Gallen Group and Pope Francis’ agenda are now fairly well known, as Meloni shows so admirably in her book.

The Sankt Gallen Mafia, as many readers will know, was a group of cardinals and bishops that regularly met, from 1996 on, in Sankt Gallen, Switzerland to discuss their reform agenda for the Church. What they discussed – from Communion for the divorced and “remarried,” intercommunion, collegiality and synodality, decentralization of the Church, and so on unto the married priesthood – has been on the agenda of Pope Francis, too. Cardinals Karl Lehmann, Walter Kasper, Achille Silvestrini, Godfried Danneels, Carlo Maria Martini, S.J., Cormac Murphy-O’Connor, and Basil Hume, to name only a few, were among them.

Meloni shows that Martini was the head of this group and that his godfather was Father Karl Rahner, S.J., the leader of the revolutionary group at the Second Vatican Council. What this godfather had started, the Sankt Gallen Mafia wanted to bring to a successful conclusion. It is interesting to note that in a 2017 book, For a Missionary Reform of the Church, edited by Father Antonio Spadaro, S.J. and Professor Carlos Maria Galli (both close collaborators of Pope Francis), there is direct reference to Father Rahner and his call for a decentralized Church that seems very close to the idea of creating an “Amazonian” Church, for example. Rahner is quoted as saying, in 1962: “Major Churches with their own discipline, their own liturgy and their own spiritual and theological heritage could also be formed in the future, by ‘divine providence’ [sic], say in Africa, Asia, or South America.”  — Article continues below Petition — SIGN: Show Pope Francis the Latin Mass will survive any suppression 34453 have signed the petition.Let’s get to 35000! Add your signature:   Show Petition Text Keep me updated via email on this petition and related issues.

Let us now deal with the question of Benedict’s (and also John Paul II’s) role in the advance of this group.

The interconnection between these revolutionaries and the recent Popes is interesting. Meloni recounts that Cardinal Silvestrini, who headed the Sankt Gallen Group  after Cardinal Martini had fallen ill with Parkinson’s disease, from 2003 on, “had been close to John Paul II for decades,” and that, around that time of 2003, “he fed the mafia firsthand information about the pontiff’s declining health.” Silvestrini was also one of the last persons to see the Pope before he died. One wonders why John Paul II would give such attention and access to a man whom he himself, in 1993, removed from being the head of the progressivist Council of the European Bishops’ Conferences (CCEE), due to his attempts to subvert Roman authority. Still, John Paul II made him a cardinal in 2001.

As one can see already here, the lines between the “conservative” Popes and their progressive counterparts are not so very clearly drawn.

Pope Benedict himself, too, had a close bond with a leader of the group, Martini. Meloni recounts how he repeatedly praised Martini in public throughout the years. For example, the German cardinal invited Martini to work with him at the Congregation for the Doctrine of the Faith in the 1980s. In 1995 he claimed that, despite their differences, Martini complemented him. In 2006, as Pope, he praised Martini in front of a group of young people.

Then, during the 2005 Conclave – for which Silvestrini invited his fellow Sankt Gallen cardinals to the Villa Nazareth in Rome to plot against Ratzinger’s election – there took place an ominous conversation between Martini and Benedict over lunch before the fourth ballot. States Meloni: “According to vaticanista Bernard Lecomte, multiple eyewitnesses saw a mysterious lunchtime conversation between Martini and Ratzinger,” adding that this conversation “left at least one witness with the impression that Martini had shunted his votes to Ratzinger, possibly in exchange for a guarantee about the new pontificate’s orientations.” Pope Benedict, however, was later to deny the existence of such an agreement.

At that point during the Conclave, it had become clear that “a ‘dramatic’ struggle between the Gallen group and Ratzinger’s supporters took shape,” with Ratzinger leading and Bergoglio, the candidate of the Sankt Gallen Group, after him. Interestingly, during that same lunch break at which Ratzinger met with Martini, Bergoglio is said to have told his supporters to vote for Ratzinger. “Expect surprises,” were Martini’s words not long after Ratzinger’s election. An anonymous memoir of a cardinal, published in 2007 and suspected to have been written by Silvestrini, argued along the same line: he proposed Jorge Bergoglio as future Pope, adding: “This point is to be remembered for the future, in case the pontificate of Benedict XVI does not last long.”

Did Martini and Ratzinger make some sort of agreement, with Martini promising his votes and with Ratzinger promising that he would resign if the Sankt Gallen Mafia deemed it fit?

The Mafia’s plans were by then very clear.

According to Meloni, Martini had laid out, in 1999, a “blueprint for a succession of synods, on topics ranging from Communion for the divorced and civilly remarried to the ordination of married men.” Basil Hume, another member of the Sankt Gallen Group, inspired the thought of Martini, who already spoke in 1981 of a “synodal” Church “where power was transferred away from the papal center and towards the advisory body known as the synod of bishops.” Anybody following the current developments in the Church sees clearly how the agenda of the Sankt Gallen Group is being implemented under Pope Francis, “their” candidate.

Ratzinger’s conflicted situation might also stem from his own personal history. He had been, after all, a leading member of Karl Rahner’s group that was to overhaul the Second Vatican Council’s prepared schemata. He was close to the same man whose “spiritual heir” Martini later turned out to be. As Meloni reminds us, it was also Ratzinger who co-authored, in 1970, a text with Lehman and Kasper that argued for investigating the law of celibacy in the Latin rite. All three of these prelates also wrote texts in the 1970s challenging “the Church’s proscription against Communion for the divorced and civilly remarried.” These thoughts, as Meloni shows, go back to Rahner, who himself already hoped for a synodal Church and for questioning priestly celibacy. Thus, author Meloni concludes, Rahner might very well be called “the father of the St. Gallen mafia.”

Interesting to note, too, is that both Kasper and Danneels were tasked, at the 1985 Synod of Bishops on the legacy of the Council, to prepare the synod’s texts.

It was perhaps due to this intertwining relationship between Ratzinger/John Paul II and the Sankt Gallen Mafia that Ratzinger was willing to cooperate with them to some extent at the 2005 Conclave. “As pope, he will be a different man than he was as a cardinal,” Danneels mysteriously said after the Conclave. As Pope, Benedict certainly did not discipline Martini, when he, in a 2006 interview, publicly questioned the Church’s teaching on life issues, such as the ban on artificial fertilization. “He was the ante-pope,” Meloni argues, pointing out that Martini laid the groundwork for Bergoglio’s later papacy. Even Benedict was “listening to us,” as the mysterious cardinal (most probably Silvestrini) argued in his 2007 memoir. There was talk about him being a “transitional figure – passing quickly, without leaving a legacy,” according to Meloni.

Interestingly, the same Martini who laid the groundwork for Bergoglio seemed to have been hopeful from 2011 on. He talked about Communion for the “remarried.” In April of that year, he wrote Benedict a letter, touching upon the themes of sexual ethics, Communion for the “remarried,” and the relationship between the Church and political power. Shortly afterwards, Benedict invited him for a April 9 visit. Martini had previously written him another letter on “grave and secret things.” At their April 2011 meeting, Martini asked Benedict to take “prophetic actions,” Meloni informs us. The biographer of Cardinal Martini, Marco Garziano, later said that Martini counted on Benedict, “whom he helped elect, to provide new ‘surprises,’” as Meloni herself sums up the biographer’s words.

Meloni tells us that Martini’s own confessor, Father Silvano Fausti, claimed that Benedict’s resignation had been “scripted since his pontificate’s beginning – because Martini had shifted his votes to Ratzinger at the 2005 Conclave.” Martini, the priest insisted, said to Ratzinger at the 2005 Conclave: “Tomorrow, accept the papacy with my votes. You accept, since you have been in the Curia for years; you’re intelligent and honest; try and reform the Curia, and if not, you leave.”

As many of our readers might remember, it was in June 2012 that Martini told Benedict that it was time to resign. “The Curia is not going to change; you have no choice but to leave,” the old cardinal told the Pope. He stated in January of that same year: “I hope that he will resign soon.” In April, Martini went with “a few other bishops” to “Switzerland – that way they too will be more free,” as he told a friend. Interestingly, in that same very year, Cardinal Kasper started talking about a “southerly wind” that was blowing in the Church. A wind coming from Argentina?

The rest is history. “We need a Francis,” said Cardinal Danneels right before the 2013 Conclave. The Sankt Gallen Mafia won at that Conclave, with Pope Francis since then working on each of the points on their agenda, from Communion for the “remarried” to intercommunion, priestly celibacy, the female diaconate, and now, finally, a prelude to a third Vatican Council, the Synod on Synodality.

Will we ever know exactly what sort of agreement Ratzinger made with Martini at the time of the 2005 Conclave?

LifeSite reached out to Pope Emeritus Benedict XVI for comment, and we shall update this report should he respond.

Dr. Maike Hickson was born and raised in Germany. She holds a PhD from the University of Hannover, Germany, after having written in Switzerland her doctoral dissertation on the history of Swiss intellectuals before and during World War II. She now lives in the U.S. and is married to Dr. Robert Hickson, and they have been blessed with two beautiful children. She is a happy housewife who likes to write articles when time permits.

Dr. Hickson published in 2014 a Festschrift, a collection of some thirty essays written by thoughtful authors in honor of her husband upon his 70th birthday, which is entitled A Catholic Witness in Our Time.

Hickson has closely followed the papacy of Pope Francis and the developments in the Catholic Church in Germany, and she has been writing articles on religion and politics for U.S. and European publications and websites such as LifeSiteNews, OnePeterFive, The Wanderer, Rorate Caeli, Catholicism.org, Catholic Family News, Christian Order, Notizie Pro-Vita, Corrispondenza Romana, Katholisches.info, Der Dreizehnte,  Zeit-Fragen, and Westfalen-Blatt.