Although based in Chicago, the Coalition for Canceled Priests has said it hopes to bring the billboard trucks to many other parishes and dioceses further afield. 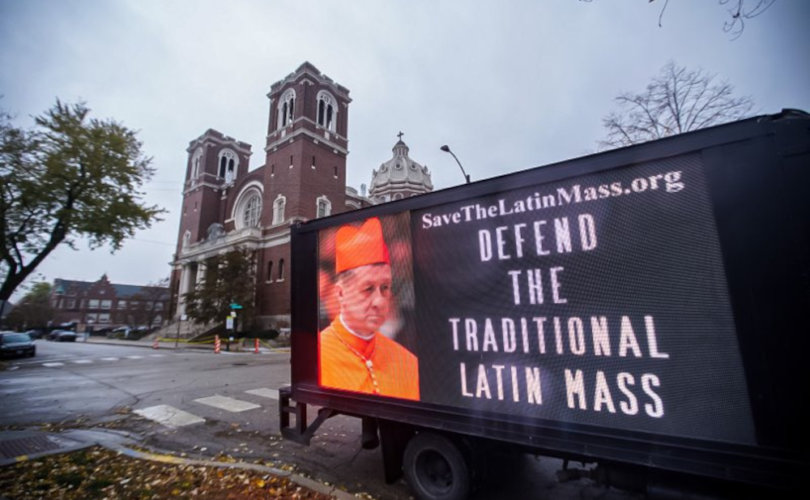 CHICAGO (LifeSiteNews) — In response to Cardinal Cupich’s movement toward a crackdown of the Traditional Latin Mass (TLM) in the Archdiocese of Chicago, the Coalition for Canceled Priests (CFCP) has launched a billboard campaign to have the Latin Mass protected from suppression.

The “Save the Latin Mass” campaign officially launched Sunday in Chicago, where trucks with billboards displaying a picture of Cupich and the message “Defend the Traditional Latin Mass” parked outside the archdiocesan churches of Holy Trinity, St. Stanislaus Kostka, St. Mary of the Angels, St. John Cantius, and Holy Name Cathedral, Cupich’s episcopal seat.

An email statement from CFCP noted that the object of the campaign is to “raise awareness about the current attacks underway on the Traditional Latin Mass,” especially in light of Pope Francis’ July motu proprio Traditionis Custodes. The lay-led CFCP organized the campaign in partnership with Regina Magazine and the Lepanto Institute.

Following the release of the Pope’s letter, which purports to severely restrict the use of the 1962 Missale Romanum throughout the Catholic Church and impose tightly limited permissions for newly ordained priests to say the Latin Mass, “several US bishops, including the influential but increasingly marginalized Cardinal Cupich, are [rolling out an ongoing] progression of heavy restrictions on the Traditional Latin Mass, with the ultimate goal of eradicating it completely,” the CFCP warned.

On November 4, Cupich wrote an article for Pray Tell, the pro-LGBT blog of Collegeville Liturgical Press, apparently responding to queries among Chicago priests regarding Traditonis Custodes and its implementation.

The prelate, a well-known liberal and close ally of the Pope, strongly supported Francis’ claim that the 52-year-old Novus Ordo Missae is the “unique expression of the lex orandi of the Roman Rite,” advising the faithful who now worship according to the vetus ordo that they may soon be required to “leave behind” the TLM.

According to Cupich, the Pope hopes to restrict the TLM in order to “re-establish throughout the Church of the Roman Rite a single and identical prayer that expresses its unity, according to the liturgical books promulgated by the saintly Popes Paul VI and John Paul II, in conformity with the decrees of the Second Vatican Council.”

“In other words, there are not two forms of the Roman Rite, because the word ‘reform’ means something, namely that we leave behind a former way of celebrating the sacraments and adopt a new form,” he said, suggesting a coming clampdown of the traditional liturgy within the Chicago archdiocese.

“In response, we, a group of Catholic laity from around the US, have united in a shared mission to prevent the elimination of the Mass of the Ages,” the CFCP email stated.

The letter explained that the laity “have a right and a duty to inform our church leaders when they are in error” owing to Canon 212, §2 of the Catholic Code of Canon Law, which states: “The Christian faithful are free to make known to the pastors of the Church their needs, especially spiritual ones, and their desires.” — Article continues below Petition — PETITION: Pope Francis MUST clarify what he told pro-abortion Joe Biden about Holy Communion 24436 have signed the petition.Let’s get to 25000! Add your signature:   Show Petition Text Keep me updated via email on this petition and related issues.

The campaign is also designed to show a swell of support from the laity for those priests who are “in fear of being canceled” for their willingness to continue offering the TLM, the CFCP said. “The Coalition will stand up for these priests, so they know that the laity are behind them, and they know our appreciation for the access they provide to the Mass of the Ages.”

Although based in Chicago, the CFCP has said it hopes to bring the billboard trucks to many other parishes and dioceses further afield. To help with the campaign to raise awareness about the suppression of the TLM, donations can be made to the Save the Latin Mass group’s GiveSendGo fundraiser here.