The ardently pro-homosexual Association of U.S. Catholic Priests has proposed ‘priest-less parishes’ as an answer to the priest shortage, and it proposes that laypersons could step into the role of a pastor, leading parishes in “Eucharistic Services” – not as a Mass, but as a pseudo-replacement for Mass. 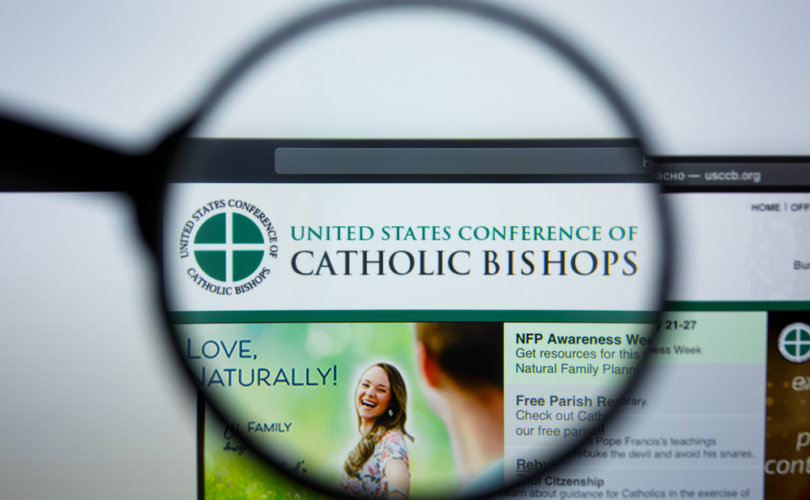 Listen to this article

(Lepanto Institute) – The Association of United States Catholic Priests (AUSCP) held its annual assembly in Baltimore from June 20–23. The theme of the Assembly was “Let Us Dream: The Path to a Better Future.”

During the assembly, we published a report detailing the pro-homosexual ideologies of the majority of the speakers at the conference, such as Bishop John Stowe, Father Danial Horan, and Sister Mary Novak, the new executive Director of NETWORK. We also profiled the radical homosexual activism engaged in by two of their “John XXIII Award” recipients.

And since 2015, the Lepanto Institute has investigated and revealed the consistent attitudes of the AUSCP that violate Catholic moral and theological teachings, such as:

Over the years, the AUSCP has received support and benefited from the participation of cardinals, archbishops, and bishops who have attended, spoken at, and celebrated Mass for the AUSCP. Such include Cardinal Wilton Gregory, Cardinal Blaise Cupich, Archbishop John Hartmeyer, Archbishop Robert Carlson, Archbishop John Wester, Bishop Richard Pates, Bishop John Stowe, and others.

Archbishop Wester actually serves as the official “episcopal moderator to the United States Conference of Catholic Bishops (USCCB).” Life is winning! With the overturning of Roe v. Wade, the pro-life movement needs a truthful voice in the media now more than ever. Please donate today to help our coverage reach millions around the globe. Pro-lifers around the world and the innocent unborn children are counting on you to give them a voice.

For the first time in the 11-year history of the AUSCP, an office of the USCCB paid for a vendor’s table at the AUSCP’s annual assembly, meaning that money collected by the Catholic Bishops of the United States formally supported this morally and theologically degenerate organization.

On page 40 of the AUSCP’s 2020 Assembly Program Book, listed just above the pro-same-sex “marriage” organization New Ways Ministry, is the USCCB Office of Certification for Ecclesial Ministry.

The Lepanto Institute was able to obtain a photo of the USCCB’s booth at the assembly, as well as one of the business cards sitting on the table belonging to Marc J. DelMonico, assistant director for the Certification of Ecclesial Ministry.

According to the USCCB’s website for the Office of Certification for Ecclesial Ministry:

“We resource bishops, regional and state conferences of bishops, diocesan programs, and professional ministry associations and organizations across the country. We support their efforts to train those who minister in the name of the Church.

Dr. DelMonico didn’t just happen to show up to the AUSCP’s assembly. It turns out, he’s an actual member of the AUSCP. In 2020, DelMonico wrote the following on his own website, under the headline “Association of U.S. Catholic Priests (AUSCP) Virtual National Conference 2020”:

“I am participating in this virtual gathering of the largest association of U.S. Catholic priests as an associate (non-clergy) member of the AUSCP. Their annual event is focused on the theme of ‘Our Catholic Faith in the Political World.’ Opportunities for an online retreat and keynotes on Church teaching in the context of legislative advocacy, preaching to the political needs of today’s society, practical action during the 2020 election year, and more. Very modest and daily or all-inclusive rates are available and anyone can register for the event. The AUSCP is an organization which is deeply committed to collaborative ministry with lay ecclesial ministry leaders and other lay ministers in today’s Church. Read more and register here.”

In January of 2021, the AUSCP hosted DelMonico as a speaker for a webinar with the title, “God’s Own Vintage: Developments in Lay Ecclesial Ministry 15 Years after Co-Workers in the Vineyard of the Lord.”

It remains to be seen why DelMonico is involved with the AUSCP or why this particular office of the USCCB would purchase table space at the assembly, but his presence is deeply concerning. One possibility has to do with the AUSCP’s promotion of “priest-less parishes,” where pastoral duties would be handed off to lay ministers. The idea is that because of the priest shortage, “lay ministers” could be used to run individual parishes while priests are given the responsibility of multiple parishes, to which they travel from week to week.

The AUSCP’s 2018 document, “Pastoral Care in and Through Priestless Parishes,” says at the top of page 2 that Pastoral Leaders will:

“[T]ake responsibility for the day to day coordination of parish activities, and take initiative as needed to motivate, to correct, and to affirm persons who work in the parish ministries; and where needed, provide conflict resolution and reconciliation. To be a true pastoral leader he/she must lead worship where appropriate, and likewise break open the Word.  In short, he/she would be in the role of pastor, excepting sacramental ministry, and under the supervision of the canonical pastor.”

The key take-away from this is that the person the AUSCP proposes would be a pastor in all manners except for the provision of the Sacraments. But further down the page, the AUSCP suggests that this model could shape the future of the priesthood, and it specifically includes women in that assessment:

“These Lay Pastoral Leaders will provide a very important proving ground for the USA Church because we would learn what men and women, married and unmarried, can accomplish as pastoral leaders, and what kind of persons we need. We will gain a great deal of wisdom about what works and what doesn’t work. In a larger framework, it would show how the priesthood of the future might discern proven individuals.”

The last line in that quoted section, “it would show how the priesthood of the future might discern proven individuals,” is the key to understanding the true goal: if lay women are allowed to lead parishes as “Pastoral Leaders,” and if women can be ordained as “deacons,” then a path to discerning the “priesthood of the future” could include them as “proven individuals.”

The references section at the end of the paper lists the USCCB’s document, published by DelMonico’s subcommittee, “Co-Workers in the Vineyard of the Lord.”

Bear in mind that the title of DelMonico’s workshop for the USCCB last January included this: “Developments in Lay Ecclesial Ministry 15 Years after Co-Workers in the Vineyard of the Lord.” This connection between the USCCB’s paper “Co-Workers in the Vinyard of the Lord,” the AUSCP paper on “priest-less parishes” heavy citing of the USCCB document, and DelMonico’s presentation on it to the AUSCP, cannot be a mere coincidence. In the USCCB’s 70-page document, the phrase “lay ecclesial minister” appears 155 times and is defined this way on page 12:

“The term ‘lay ecclesial minister’ is generic. It is meant to encompass and describe several possible roles. In parish life – to cite only one sphere of involvement – the pastoral associate, parish catechetical leader, youth ministry leader, school principal, and director of liturgy or pastoral music are examples of such roles. Participation in the exercise of the pastoral care of a parish, as described in the Code of Canon Law, canon 517 §2,12 is another example of lay ecclesial ministry, although it differs in kind from the other roles because it exists simply because of the shortage of priests.”

The AUSCP’s notion of priest-less parishes is entirely predicated on the notion of a priest shortage, and it proposes that laypersons could step into the role of a pastor, leading parishes in “Eucharistic Services” – not as a Mass, but as a pseudo-replacement for Mass – while a traveling priest would consecrate a large number of hosts that would sustain the parish until he comes back. And the thing is, if this proposal of the AUSCP’s is accepted, it is the USCCB’s office of Certification for Ecclesial Ministry that would provide the certifications for such ministers. Of course, for the AUSCP, when this is combined with the potential to “ordain” women to the diaconate, this is one step closer for what the AUSCP said “would show how the priesthood of the future might discern proven individuals.”

One of the documents circulated at this year’s AUSCP Assembly is titled, “AUSCP Background Document to a Request to the United States Conference of Catholic Bishops Urging Full Restoration and Implementation of the Rite of Penance.” The document was originally published on January 15, 2015 “by decision of the leadership group/board of directors,” and calls for “full implementation of the Rite of Penance, including Rite 3, the fully communal celebration with communal confession and absolution.”

Briefly, there are two rites for the Sacrament of Penance, and an emergency use sometimes referred to as the “third rite,” and more appropriately called “General Absolution.” The first is simply one-on-one, where a single penitent meets with the priest to confess his or her sins and receive absolution from the priest. The second is a community reflection with communal prayer, spiritual reading, and sometimes song, ending in individual confession as with the first rite. The third rite pertains to a grave emergency, where there is no time for individual confessions, such as being in the midst of a war zone or on a doomed transport vessel like an airplane or ship.

The AUSCP’s paper requesting the use of “rite 3” of the Sacrament of Penance complains that with Rite 1 “there would not be enough confessors if people were coming to celebrate Rite 1 in the numbers that came for private confession in the 1950s.” It also complains that “[w]hen Rite 2 is celebrated it is generally impossible to gather enough confessors to hear individual confessions properly within an appropriate period of time, not with the personal dialogue the Rite of Penance envisions, and the time limits people expect.”

CANCELLED: Stand with Fr. JesusMary after he was BARRED from Priestly Ministry for Criticizing Pope Francis!

7354 have signed the petition.

Keep me updated via email on this petition and related issues.

So, because these priests do not wish to spend long times in the confessional, they pad their argument in favor of “Rite 3” by arguing that it “enables penitents to experience reconciliation in and with the community as indication of their reconciliation with the Church and God.” In short, they want confessions to be a community event, where congregants gather and assist each other in examining their consciences, and then publicly proclaim their confessions, while the priest then grants a general absolution to all present.

While not indicated in this paper, the application of this particular form of “confession” would be advantageous to their proposal for “priest-less parishes.” If a priest is not regularly at one parish, and since he would not have the time to hear the confessions of all congregants in one weekend sitting, the community aspect of hearing one loud confession while granting one general absolution to all present would save time. At least, so the thinking appears to be.

Whatever the case, the development of a relationship between a USCCB office and the AUSCP is deeply distressing. The fact that a USCCB office paid for a vending table at the AUSCP’s annual assembly is bad enough – Catholic funds were sent to this association of dissident priests. Worse is that the associate director of that USCCB office is an actual member of the AUSCP. And still worse is that if the AUSCP’s plan for priest-less parishes is to be realized, it is this office that would be granting certification for “Pastoral Leaders” at those priest-less parishes.

In subsequent articles, we’ll be taking a close look at other vendors at the AUSCP’s assembly, and we’ll be examining the presentations delivered by their speakers. Please contact your bishop and respectfully ask that he publicly condemn the AUSCP and forbid his priests from membership.